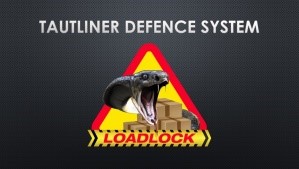 Tarpaulin covered and curtain-sider loads travelling on South Africa’s extensive road systems are uniquely at risk from attack and theft from both organised gangs and opportunistic thieves.

Whether the tarpaulin is manufactured from either toughened plastic or canvas it is vulnerable from physical assault by assailants armed with knives, pangas or other sharp objects.

On In 2019 alone there were 14052 cases of car and truck hijackings reported to the police. Of this 1822 were trucks. (source: Stattsa).This represents an almost 22% increase on incidents the previous year. There are regrettably no statistics for where a load, rather than the actual truck, was attacked and robbed.

FleetWatch July 2020 noted that this type of crime is believed to be increasing rapidly and particularly where valuable loads such as alcohol, tobacco, electrical goodl and foodstuffs are involved.  The actual number and value of such robberies is however estimated to be considerably higher since cargo handling companies may choose to carry the cost of the losses themselves rather than have it publically known that they were unable to protect a customer’s load.

As the economy has worsened this type of opportunistic (and in many cases, organised) crime will has only become more of an issue.

Once a tarpaulin or curtain-side has been attacked and ripped the load is visible and can more easily be stolen. This, as this video (LINK TO VIDEO) demonstrates, can easily happen whether the vehicle is moving or not. In many cases the driver is not even aware that his load is in the process of being robbed. But as you can see, with Loadlock this cannot happen.

Loadlock is a highly effective system that has been developed specifically with this situation in mind – to thwart anyone attempting to steal from a load (whether the truck is moving or parked).

The Loadlock system consists of a specifically designed steel reinforced tough steel mesh which lies beneath the tarpaulin and is placed in such a way that no one armed with a panga or some other form of cutting object will be able to gain access and help themselves to the load.

The system is competitively priced and can be fitted by Aero Truck’s trained staff in under 4 hours. The value of the load makes the price of the Loadlock patented system highly attractive to transport operators.

Areas we are based in :